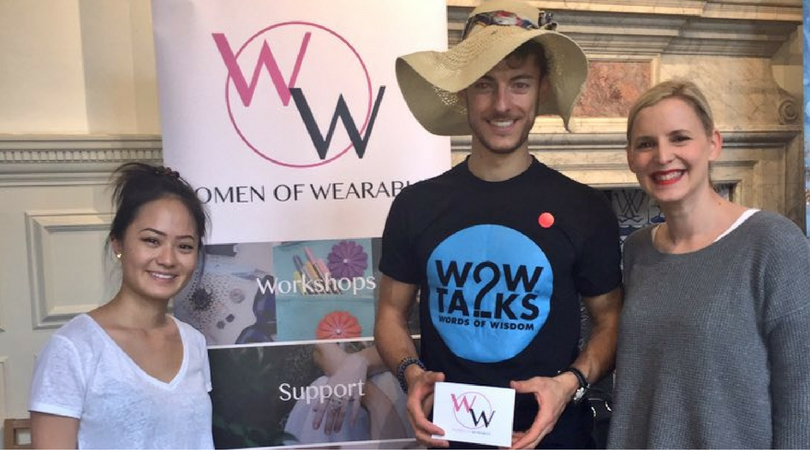 Wearable Tech assistant Rachael Yeung exhibited at the WOW Talks TV’s first women in tech event on 20th September 2016 in London. Here is Rachael’s account of it all.

Setting up the exhibit space in the morning with our brand new display banner as we braced ourselves for the crowd of inspiration hungry school pupils to arrive.  We were informed that there would be 400 school girls arriving to be inspired!

The event started with a bang in the maxed out auditorium and CEO of WOW Talks Kim Arazi started the event by introducing the morning presenter Mohima Ahmed.

The speakers came from many different backgrounds, all women in tech sharing their career stories and great nuggets of wisdom. The 7 minute talks they gave after one another was fast paced but packed full of information! Thankfully there were refreshing sessions of performances by Ara Harmonic and ‘waking up exercises’ in between to give us time to absorb it all!

Fashion tech company Lost Values by Elena Corchero showcased their smart and fashionable reflective scarf to keep you safe and seen at night!

After the morning talks the school pupils all filtered out and began their walk around the exhibition areas, workshops and mentor sessions. I was not mentally prepared for the rush of interest from all of the students, but it gave me opportunity to show the girls what wearable tech was all about.

The girls loved getting their hands on the wearable tech pieces and really wanted to know what we were all about and how they could make their own projects. They were very excited to know that we were soon going to be holding our wearable tech workshops in London!

There was barely enough time for a rest in between talking to groups of students that the event was almost over.

As the morning wrapped up we had time for a rest before the evening repeat of the event. It was almost just as busy as the morning event having all of the wearable tech projects displayed made us a bit of an attraction, but we were prepared this time!

There were new speakers at the evening talks presented by Melissa Jun Rowley and there was another refresher session in between that got everyone up from their seats!

After a full day of morning and evening speakers, it was a busy social day! We had a lot of interest for our new wearable tech workshops and made lots of new connections. I even managed to meet a few inspirational women of tech myself including Luciana Carvalho Se and caught up with an old university friend.  I  also experienced art-tech in a whole new way with Lula Tree!

The event finished for the day on a high and everyone left with a smile on their face and a little inspired twinkle in their eye.  I guess you could say we were all WOWed!