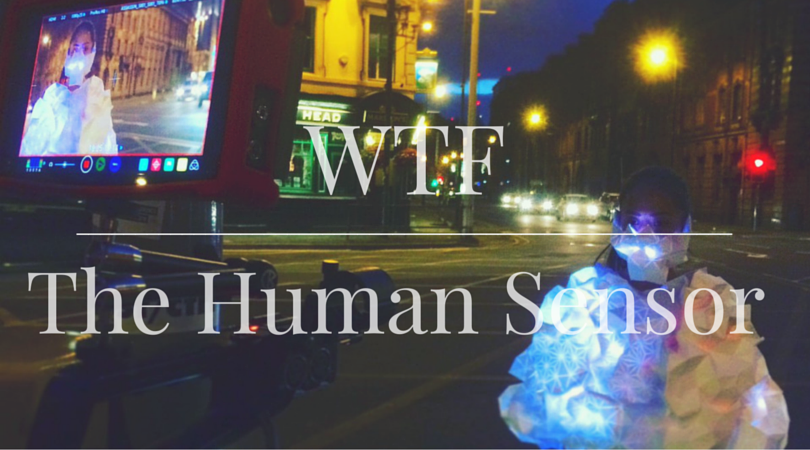 Our wearable tech assistant Rachael Yeung has been working on an exciting climate change project with Invisible Dust called the Human Sensor. The Human Sensor was designed by London artist Kasia Molga  who brought to her project up North to Manchester as part of the European City of Science Festival.

It is a wearable cape which consists of a mask and sensors to collect the air pollution that the wearer breathes in. The concept of the Human Sensor project is to make the invisible visible.

Data collected from the sensors displays the air pollution by way of coloured light and the intensity of light determines how much of that particular pollutant the wearer breathes in.

The exciting part of the project is there will be a live performances of the Human Sensor from 23rd-29th July 2016 in Manchester City Centre.

Rachael gives us her experience of the Human Sensor Fellow programme.

The Human Sensor Fellow Programme was a three-week long programme that brought together students and graduates from a range of disciplines to be inspired by the workshops and to help promote the project during the build-up of the performance. The group consisted of chemists, psychologists, geologists, biomedical students and myself.

The weekly workshops had a range of speakers from The European City Of Science, the artist Kasia Molga, Alice the director of Inivisble Dust, Professor Frank Kelly and Andrew Grieve from London Air Quality, Kamila Rymajdo, science-poet Sam Illingsworth, Maya Chowdhry an interactive artist, Dr Sheena Cruickshank, Dr Lamiece Hassan, a keynote from Dan Hett and Tom Higham from Future Everything. Each speaker was very inspiring giving their expertise on their views and work with climate change and how we can effect change.

The black carbon data collected from the Oxford Road walks.

We collected our own data of black carbon from two separate walks around Manchester Oxford Road, and visited the Climate Change exhibition in Manchester Museum. We discovered that being in close proximity to diesel engine motors exposes us to a lot more black carbon than if we were to take a different route and avoid the congested main roads.

I picked up some great tips from Sam Illingsworth for public speaking and found out lots about air pollution and the effects on our bodies.

Did you know air pollution contributed to around 40,000 deaths in the UK?!

It was also great meeting the artist Kasia herself, and seeing the prototypes of the wearables in action.

I originally wanted to participate in the program to work with more wearables, but to also learn more about the air pollution in Manchester. I never knew Oxford Road was so polluted and that diesel cars contributed so much to the air pollution that is effecting our health so much! The programme was a great experience with not only inspiring talks but a great group of people!

We would love to invite you to the Invisible Dust Human Sensor launch night on Saturday 23rd July 2016.  It will only be in Manchester for 6 days during the European Festival of Science Festival ending on Friday 29th July.  Details on the website here!