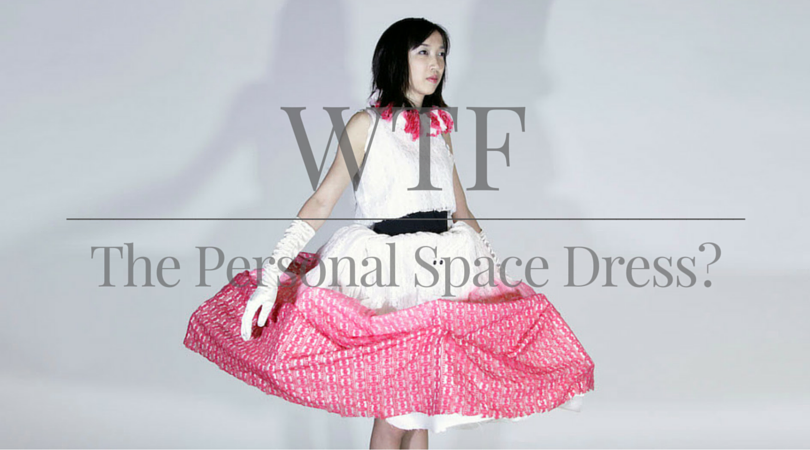 Do you sometimes feel that your personal space is being invaded in crowded and not so crowded places?

Artist and PhD student, Kathleen McDermott based in New York, created a Personal Space Dress during her studies in Hong Kong.  Her aim was to incorporate wearable technology into her projects that instantly strikes a conversation with people and their interaction with society.

The Personal Space Dress senses any object within  a ‘personal space’ range for it to automatically start expanding. The purpose is to notify the person or space invader that he or she is within her personal space and would back away thus allowing her to reclaim her personal space!

After watching this amusing video, we were intrigued to find out more about the innovative, fun and creative designer.  We skyped Kathleen to ask her how she made her Personal Space dress that actually solves a common problem!

Kathleen was so generous to spend an hour with us to talk about her Personal Space dress as well as giving us a tour of her studio in New York.  What started as having her own personal space invaded during her commute to and from work, she took this idea from concept to a dress!  Made from various components of several umbrellas, deodorant sticks and troubleshooting on online forums she learnt how to turn her idea into a reality (i.e. prototype!).

In an effort to keep costs down, Kathleen cleverly made her own linear actuators out of continuous rotation servo motors and deodorant sticks.  She used ultra sonic distance sensors to measure the proximity of a person from getting too close, a soldering iron, an arduino uno, batteries and material to make the dress.

Kathleen’s video filmed in Hong Kong unintentionally went viral and she shared with us many stories of people’s reaction to her masterpiece. They ranged from the humorous to the annoyance of being on the receiving end of a personal space dress to personal and unnecessary comments about why Kathleen made the dress.

Whatever challenges people experience in their lives, Kathleen’s project is about identifying and solving problems in interesting ways that addresses real challenges that people experience in society.  Some may argue that a tap on the shoulder to ask the space invader to kindly move may suffice however, has society made it difficult for someone to speak up about a personal space invasion without fearing the repercussions of the space invader?

The Next Dress : The Social Escape Dress

Kathleen also gave us sneaky peak at her next project, the Social Escape Dress.  It is a dress that releases a cloud of fog when the wearer is feeling stressed.  Kathleen intends for the Social Escape Dress and accompanying video (coming soon!) to be funny, as she’s found humor to be a useful tool for approaching difficult topics.

The Social Escape Dress is #7 in her Urban Armor collection.  Urban Armor is a collection of DIY wearable electronics that investigates the relationship between technology, the body and personal and public space.

We enjoyed speaking with Kathleen and will follow her creative progress as she explores how technology can be used as we interact within society.

For more Fun and Funky projects, read our Rachael’s blog on how she made her WTF | Wearable Tech Fashion | Light up shoes.