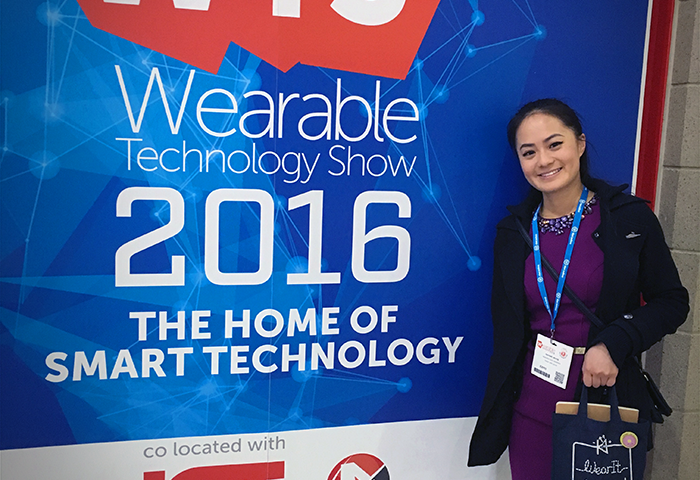 Our Wearable Tech Assistant, Rachael Yeung attended the Wearable Tech Show in London, United Kingdom 2016 and reports on her favourite wearable tech products that are coming out!

Some of the wearable tech devices that I enjoyed were the ŌURA and KERV smart rings, Amplified Robot virtual reality goggles and the smart garments of Hexoskin, BuddieHoodie, Smartlife and Bonnie Binary.

A smart ring by ŌURA quickly grabbed my attention.  It tracks your sleep to help determine how your performance will be during the day. I liked how you didn’t need to manually tell the tracker when you were sleeping, but it would not only accurately track when you are actually sleeping but also your REM cycle and other stages of sleep. How accurately, I am unsure of, but it makes it a lot easier to use than most of the typical sleep applications that are currently available.

I raised the question of data protection and so far the company does not share any of your data or track with GPS. And of the data they do collect, they do so anonymously for product improvement.

The battery unfortunately makes the smart ring large in size too making the ring bulky.  However, it does have up to 3 days worth of battery life and charges in under an hour. ŌURA are currently looking into making the size smaller and hopefully more range of designs for the fashion forward and for the people with smaller hands.

The KERV smart ring has the similar problem with bulk, although it has a smaller battery so it’s more slimline than the ŌURA ring.

KERV is a contactless payment ring, which is first of it’s kind that only requires the minimum efforts of the wearer, as it only has to be within the vicinity to take a payment. You control all payments from an app, so in the likeliness of losing the ring you can suspend any further payments that your ring may be used fraudulently for. Although I enjoy the effortless use of contactless, it would probably only be most useful in an environment where I would be constantly needing a payment e.g. Regularly using the London Underground. And if you tend to lose your rings easily, it would probably be more of a hassle regardless of the scratch and water proof features.

There was also an abundance of Virtual Reality goggles and Augmented Reality apps.

My only complaint was the comfort and use of the wearable because when I managed to adjust the goggles correctly to fit my head, I started to feel signs of vertigo. Sometimes the timing of the ‘real-time’ display was out, or the distance of the screen was too far away.  Aside from the comfort issues there are many great uses of VR goggles as you can see in the pictures below.

Amplified Robot is a leading digital development lab based in London that have created awared winning VR, AR and 360° video experiences. I think their best was using VR for the medical field in surgery environments to train medical professionals, it gives them an idea of what it will be like before they go into surgery with their patient. Having an idea of what to expect for the doctor may increase the success rate of the surgery, which is something every surgical procedure can benefit from.

Donned the next generation biometric shirts that monitor more than just your heart rate. Hexoskin aim to monitor health in space! The vest that was on display seemed comfortable and seam less, with a cool touch. Many of the current competitors have a bulky like heart monitor and are unpractically tight fitting, which is what makes Hexoskin different. The monitor is just a thin elasticated band that sits just above the waist, and the material is stretchable enough to move around in. Second skin health monitors are looking to make this technology even more comfortable in the future by potentially having a device away from the body, so there will be no restrictive device on it at all.

gym wear monitors a range of body activity and has a range for both men and women to wear.

Although measures less vitals than Hexoskin, it’s the perfect smart textiles for the gym. It’s similar in the way that it has a small detachable device that you connect to the garment, and it measures your heart, respiratory rate and calculates the calories burnt. The device connects through bluetooth to your smart phone so you get realtime data of your workout, and also enables you to monitor several athletes.

As a fellow Manchester based company, we will definitely be supporting their success.

Is the perfect lounge wear that uses patented HB3Technology™. It is a washable wearable hoodie that has embedded earphones in the drawstrings that will never get tangled, and you can just throw the whole garment into the wash! I like how there’s a range of tops available from denim shirts to shirts and hoodies.

My personal favourite of the show was LEDs in smart textiles and fabrics being a textile designer myself.  There was a wide range of professionals from MA graduates to large suppliers that made smart textiles for the most well known designers in fashion.

The most creative was Annie from Bonnie Binary, as she teamed lights with a range of different touch sensitive controls. There was one sample using a touch slider to regulate the speed of the light, and a jacket with embedded and diffused lights that can be controlled with an app.

The slider control worked similarly to a smart phone picking up the heat from your finger rather than pressure, making it easier to control. And I particularly liked how the lights don’t protrude out, as the most common LEDS you would have worked with in circuit class’ would catch easily on other garments.

My thoughts on the Wearable Tech Show London 2016

The free conference tracks were very informative and enabled a brilliant access to unique opportunities that you wouldn’t have otherwise, for example hearing a talk from big names such as Microsoft, Misfit, Samsung and various other company professionals. My personal favourite was meeting Annie from Bonnie Binary from Bristol and a regular visitor to Manchester!

I caught up with the latest on technologies such as the newly introduced ‘hearables’ that involves any wearable device that you place on or into the ear, that has exciting new prospectives that involve potentially monitoring and even administering non invasive medical procedures to the brain.

I am now looking forward to next years show and I think with the growing interest of wearables, the show will only get bigger and better!  Fingers crossed there will be more WTF pieces next year including MadeWithGlove’s launch!